ENG vs IND, 1st T20I: Rohit Sharma’s India, on Thursday, defeated England by 50 runs at the Rose Bowl in Southampton and took a crucial 1-0 lead in the three-match series. 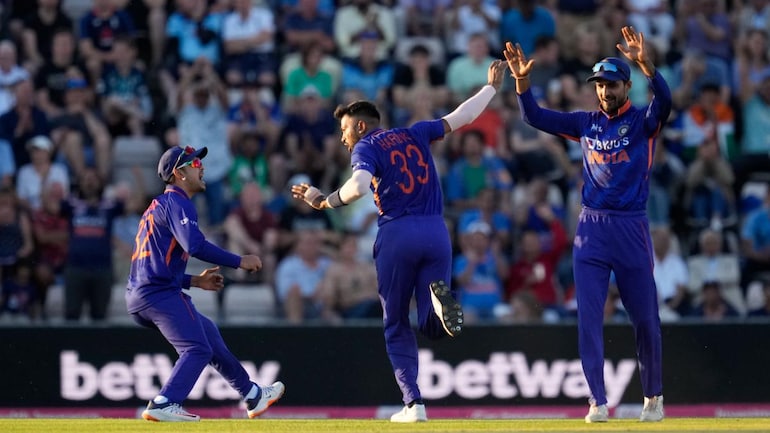 Hardik Pandya put forth an all-round show as India defeated England by 50 runs in the first T20I on Thursday, July 7 at the Rose Bowl in Southampton.

Pandya became the Player of the Match after he scored his maiden T20I half-century and picked up four crucial wickets during England’s run-chase.

Earlier, after winning the toss and opting to bat first, India racked up a massive score of 198 for the loss of eight. The Men in Blue were destined to get a score over the 200-run mark, but the loss of wickets at regular intervals in the dying stage of their innings pushed them back a wee bit.

Rohit Sharma scored 24 runs at the top and also became the third Indian after MS Dhoni and Virat Kohli to score 1000 runs as the skipper of the national team. After Rohit and Ishan Kishan gave India a brisk start, Moeen Ali dismissed both batters to get the Three Lions back into the contest.

From there on, Pandya took charge and smashed a fifty off 30 balls. Dinesh Karthik and Axar Patel also chipped in with short, but useful cameos for the visiting team. Tymal Mills, Reece Topley, and Matthew Parkinson picked up one wicket apiece.

England could never get going in their run-chase and were bowled out for 148 in 19.3 overs. Once Jos Buttler perished to Bhuvneshwar Kumar for a golden duck, the Three Lions failed to recover. Jason Roy labored his way to a 16-ball four before Hardik ended his misery.

Hardik picked up two wickets, including those of Dawid Malan and Liam Livingstone, and pushed England further on the backfoot. He also accounted for the wicket of Sam Curran. Moeen Ali (36) and Harry Brook (28) stitched together a partnership of 51 runs for the fifth wicket to keep England’s hopes alive.

But once they perished, the writing was pretty much on the walls for the home team. Jordan scored a quick-fire 17-ball 26, but his efforts were never going to be enough for the home team to win. Yuzvendra Chahal also picked up two wickets.