2nd Test: Prabath Jayasuriya’s heroics in his debut Test helped Sri Lanka hammer Australia by an innings and 39 runs on Day 4 of the second Test to level the two-match series 1-1 in Galle on Monday. 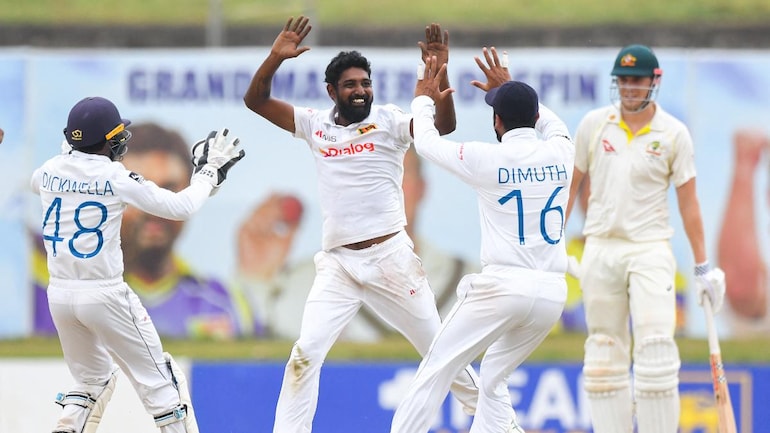 Sri Lanka rode on debutant Prabath Jayasuriya’s 12-wicket match haul and Dinesh Chandimal’s record-breaking 206* to hammer Australia by an innings and 39 runs on Day 4 of the second Test and level the two-match series 1-1 in Galle on Monday.

Resuming on 431/6, Sri Lanka were all out for 554, claiming a handy first-innings lead of 190 on day four of the contest. Australia were bowled out for 151 in their second innings on Day 4, handing Sri Lanka an innings and 39-run win in Galle.

Chandimal smashed Starc for a boundary and followed it with back-to-back sixes to bring up the first double hundred by a Sri Lanka batter against Australia. The batsman dropped to his knees and held his arms aloft soaking in applause from the crowd.

Five of Sri Lanka’s top six batsmen smashed 50-plus scores. Sri Lanka opener Pathum Nissanka tested positive for COVID-19 and was substituted by Oshada Fernando, who had played a similar role when Angelo Mathews tested positive during the series opener.