Allyson Felix is the most decorated track and field athlete in the history of the United states of America. She has won 19 medals in her career. 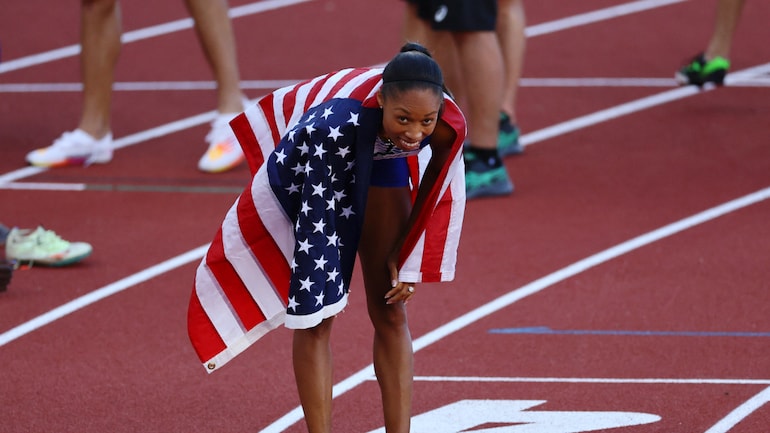 American track and field legend Allyson Felix won bronze medal in her farewell race at the World Championships after the United States finished behind Dominican Republic and Netherlands in a spectacular 4x400m mixed relay in Eugene, Oregon on Friday, 15 July.

The United States had opened a big gap in the final changeover in the relay but Dominican anchor Fiordaliza Cofil reeled in Kennedy Simon down the home stretch to win gold.

“We have been training hard for this moment so I knew I could catch her,” Cofil said of Simon.

“Allyson Felix is a legend and I am happy to be in the final with her.”

The Dominican Republic overtakes the Netherlands and the USA in the dying metres to take world mixed 4x400m victory!#WorldAthleticsChamps pic.twitter.com/tJb3EWKpid

Netherlands anchor Femke Bol produced a stunning effort in the final part of the relay as well,defying odds and coming from 30m back to overtake American Simon for silver.

Felix was given a roaring ovation by the home crowd when she exchanged baton in the second leg but the 36-year-old, running in her final major championship race, appeared to tire down after a strong start.

The champion embraced her teammates at the end of the race, signing off a legendary career, 18 years after she picked up her first Olympic medal.

Social media reacted with messages of love for the star who drew curtains after 19 World Championship medals and 11 Olympic medals in her career.

We all need to take a minute to appreciate and celebrate this. World class all the way. A mom who showed female athletes it can be done. The best in her sport. GOAT status for @allysonfelix https://t.co/vWfASX9tBZ