England vs South Africa: In his final ODI innings, Ben Stokes managed just 5 runs as he was out LBW while trying to play a reverse sweep in front of his home crowd in Durham on Tuesday. 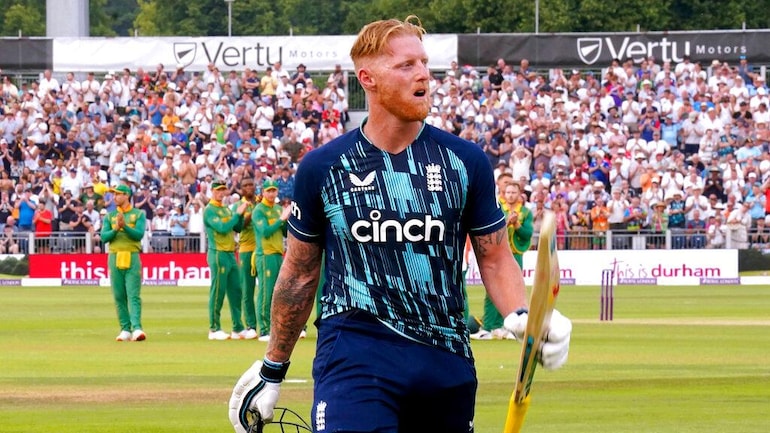 Ben Stokes out for 5 in his ODI swansong, gets standing ovation from Durham crowd (AP Photo)

It was not the ideal end to Ben Stokes’s storied one-day international career but the England all-rounder got a standing ovation from his home crowd at Chester-le-Street in Durham on Tuesday, July 19. Stokes was out for 5 in the last ODI of his career as the superstar cricketer threw his wicket away at a crucial juncture in a 334-run chase against South Africa in the ODI series opener in Durham.

Ben Stokes tried to play a reverse sweep but he missed a slider from the part-time off-spinner, Aiden Markram. Stokes was given out LBW by the on-field umpire and despite being persuaded by his partner Joe Root to go for the review, the all-rounder decided against using it.

Stokes may have missed a straight one from Markram but his final call in ODI cricket — deciding against the review — proved right as replays suggested three reds with the ball going on to hit the stumps.

Stokes wore a dejected look on his face after missing out on one last opportunity to help England to an ODI victory. However, there were handshakes and applause from the opposition and the crowd as Stokes acknowledged the support after playing his final ODI knock at the age of 31.

An inspiration. A legend. A champion.

Thank you for everything, @benstokes38 pic.twitter.com/OD1gc5OnxD

Stokes departed for 5 in the 28th over as England slipped to 142 for 3 after a strong start from their openers Jason Roy and Jonny Bairstow. After a 102-run opening stand, the hosts lost 3 quick wickets.

Earlier in the day, Stokes bowled 5 overs and conceded 44 runs while failing to pick up a wicket as South Africa hit their way to 333 in 50 overs. Rassie van der Dussen hit 133 while Aiden Markram and Janemann Malan scored a fifty each in a strong batting show from the Proteas.