India tour of England: Jasprit Bumrah-led bowling attack failed to defend 377-run total in the 4th innings in the rescheduled 5th Test in Birmingham. india have now lost 3 SENA Tests on the trot. 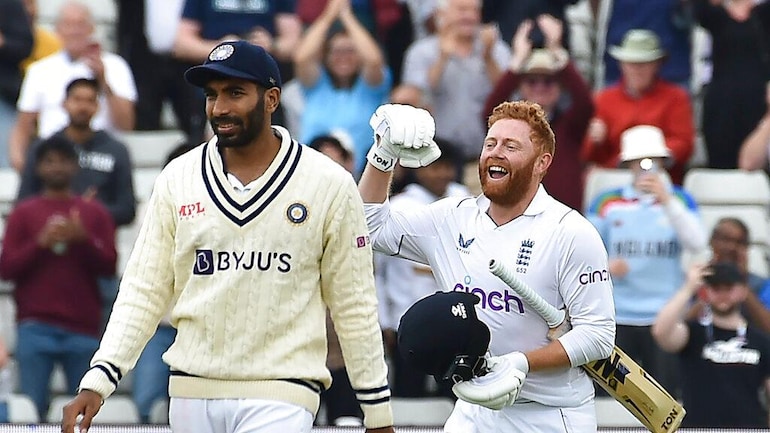 India slipped to a new low on Tuesday, July 5 as they failed to defend a mammoth total of 377 in the rescheduled 5th Test against England at Edgbaston in Birmingham. This was the first time India have failed to defend a 350-plus total in a Test match as Jasprit Bumrah had a difficult debut as Test captain. England leveled the 5-match series 2-2 to deny India a first Pataudi Trophy victory away from home since 2007.

Notably, 377 was the highest successful chase by a team against India in the longest format of the game. England gunned down the target with 7 wickets to spare and more than 2 sessions remaining on Day 5 of the Test match, which began amid high hopes as it resumed after nearly a year’s gap.

England chased down 378 in just 76.4 overs, scoring at close to 5 runs per over. Jonny Bairstow (114 not out) and Joe Root (142) pummelled the Indian bowling attack with an unbeaten 269-run stand, making it look easy as they scripted England’s highest-ever successful chase in Test cricket.

Notably, the stunning chase of 378 was also the 8th highest successful chase overall in the history of Test cricket.

England have just nailed four in a row.

With the defeat in Birmingham, India have now lost 3 Test matches in SENA (South Africa, England, New Zealand and Australia) countries on the trot after losing 2 in a crushing series defeat in South Africa earlier this year.