Cheteshwar Pujara scored his 3rd double hundred of the county championships season for Sussex, this time at the iconic Lord’s Cricket Ground as the captain of his county team against a strong Middlesex bowling line-up. 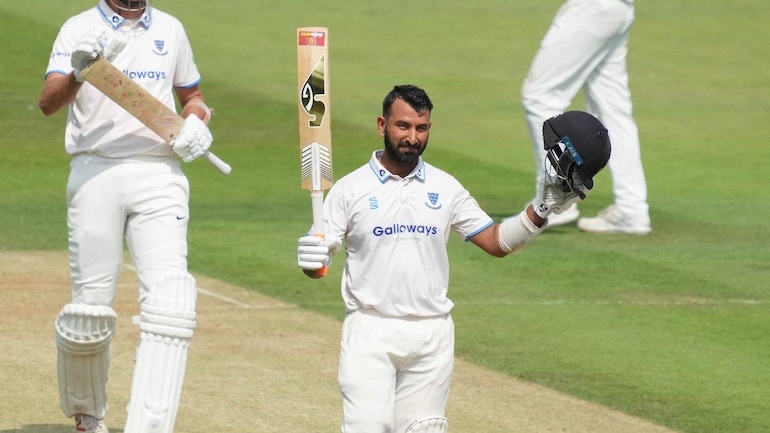 Cheteshwar Pujara continued his golden run in county championships Division 2 as the senior India batter scored his 3rd double hundred of the season for Sussex against Middlesex on Day 2 of their match at the iconic Lord’s Cricket Ground on Wednesday, July 20. Pujara made it special by becoming the first Indian batter to score a first-class double hundred at the iconic venue in London.

Cheteshwar Pujara hit 231 after batting 403 balls in a superlative innings that stretched over 2 days as he hit 21 boundaries and 3 sixes. Pujara, who was handed the captain’s armband at Sussex, led from the front as the county side posted 523 in their first innings at Lord’s.

Cheteshwar Pujara has broken the record for the most number of double hundreds by an Indian batter in county cricket. Before he signed up for Sussex in the ongoing edition, Pujara hadn’t hit a single double hundred but he has gone past Mohammad Azharuddin’s tally with 3 in a season. The former India captain had hit 212 against Leicestershire for Derbyshire in 1994 and 205 against Durham in 1994.

Pujara and Tom Alsop did the bulk of the scoring for Sussex against a strong bowling line-up of Middlesex which included India pacer Umesh Yadav, Ireland’s Tim Murtagh among others. Notably, Umesh went wicketless despite bowling 29 overs.

Pujara, who walked in at No. 4, stitched a 210-run stand with Alsop, who scored 135 from 277 balls. He then stitched a 66-run stand with Danial Ibrahim lower down the order. There weren’t any other major contribution from the batting order.

Pujara’s heroics was recognised by the London crowd and his teammates as they stood up at the Lord’s balcony and gave the India batter a standing ovation.

He began his stint with Sussex with a double hundred against Derbyshire.

He followed it up with a hundred against Worcestershire and a double hundred against Durham. Pujara hit 170 not out against Middlesex in May and the imperious form helped him return to the Test side after he was dropped for the home series against Sri Lanka earlier this year.

Pujara managed to keep his Test hopes alive by hitting a crucial 66 in the second innings for India against England in the rescheduled 5th Test.