India were bowled out for 245 in the second innings of the fifth Test match after piling up 416 runs in the first. The batters did not turn up barring Rishabh Pant and Shreyas Iyer. 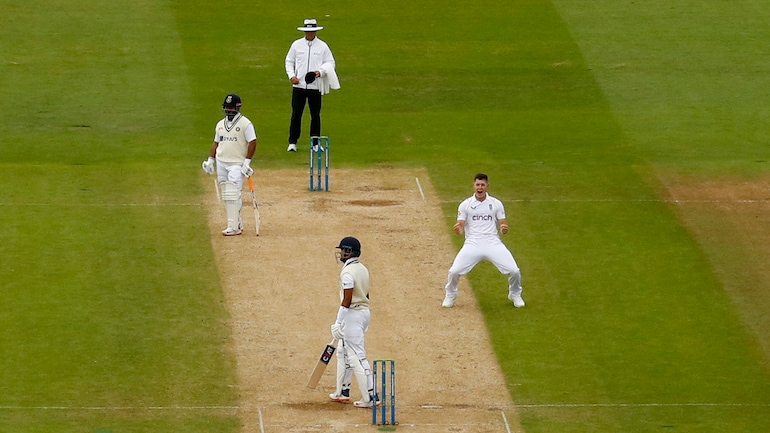 Indian batting coach Vikram Rathour rued the batting strategy by the visitors and said that India needed to find better ways to deal with the short ball. The Jasprit Bumrah led Indian side were smashed by Ben Stokes’ England after they managed to put up 245 runs in the second innings, an underwhelming achievement, considering how they shouldered tough conditions in the first two days of the Test match. Rathour said that it was quite common for international teams to use short balls against Indians, something that the batters need to be work their way around.

“Yes, they used a short-ball plan against us in the field. We had to show a little better, not intent, but strategy. We could’ve handled it slightly differently. People tried to play shots but didn’t really convert or execute them well enough. They got out to that. We will have to rethink how we handle that next time in a similar situation, against similar bowlers who keep similar fields. We will need to have a better strategy against them.”

This was not the first time that Indian line-up crumbled in a Test match. Playing against South Africa in Cape Town, Indian batting was smashed by the pace trio of South Africa, bundling them for just 198 runs. Shreyas Iyer looked the most uncomfortable on the day, getting hurried, even at the pace of Stuart Broad.

“Of course, at this level, you expect people to bowling short against us, and especially against the Indian team, people have been using the short ball for quite some time,” Rathour said.

“People have their own ways of dealing with that. As a batsman, you have your own way to deal with that. We don’t really say you have to do this or do that. As a batter, you need to decide, according to your game, what suits you in that situation and in those conditions. Unfortunately, today we couldn’t really execute whatever plans we had. Today was the day we were ahead. We should have actually batted better and put them out of the game with our batting. But unfortunately, we didn’t do that,” he concluded.

India are on the backfoot going into the final day of the Test match. Former captain Joe Root and Jonny Bairstow have been batting well and need just 119 runs to finish the game and chase down a record target of 378 runs at Edgbaston.