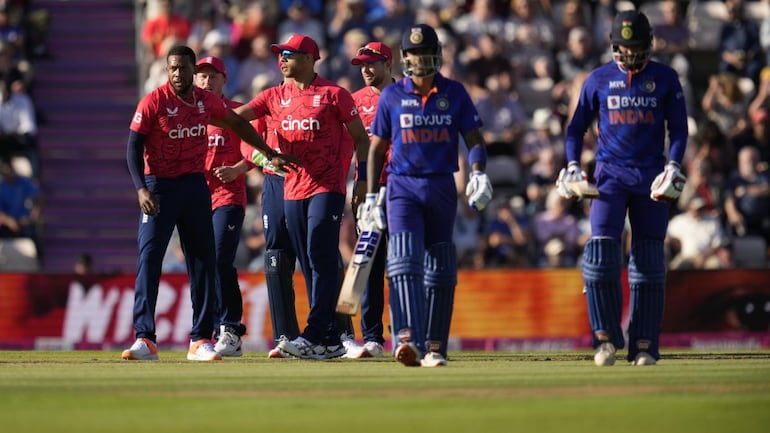 Chris Jordan, on Thursday, July 7, became the leading wicket-taker for England in T20Is. The speedster achieved the feat during the opening T20I between the Three Lions and India at the Rose Bowl in Southampton.

Before the start of the game, Jordan was two wickets short of the milestone and he accomplished it in only his second over. Jordan got rid of the dangerous Hooda to open his wicket column in the match. Hooda went for a big shot only to hole out to Tymal Mills.

Thereafter, the right-arm got rid of Suryakumar Yadav, who was looking ominous in the middle after scoring 39 runs off 19 balls with four fours and two sixes. After his first two overs, Jordan only gave away 11 runs at an economy rate of 5.50, while most of the other bowlers leaked runs at an alarming rate.

En route to the milestone, Jordan got past leg-spinner Adil Rashid, who has picked 81 wickets from 63 matches at an economy rate of 7.26. Jordan made his debut for the British team back in 2014 against Sri Lanka at the Lord’s Cricket Ground and has been a critical part of their bowling unit.

As far as the ongoing game is concerned, Suryakumar and Hooda’s wickets were crucial as the Indian batters have the potential to score big. Moeen Ali also lent Jordan support after getting the important wickets of skipper Rohit Sharma and swashbuckling opener Ishan Kishan.

Jordan, Rashid, Stuart Broad, Graeme Swann, and Jade Dernbach are the top five wicket-takers for England in the shortest format of the game.