ENG vs IND, 3rd ODI: Hardik Pandya became the Player of the Series after India defeated England by five wickets in the third match at Old Trafford in Manchester. 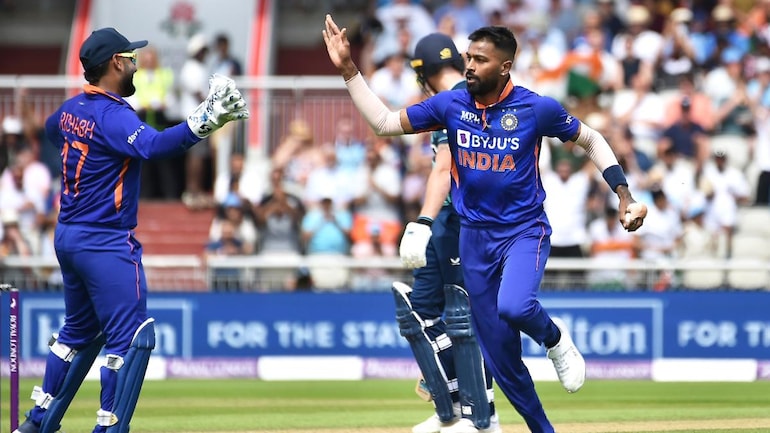 Indian all-rounder Hardik Pandya said that it wasn’t easy for the Men in Blue to get the better of England in the latter’s backyard. On Sunday, July 17, India defeated the Three Lions by five wickets at Old Trafford in Manchester to win the three-match ODI series 2-1.

Hardik, who won the Player of the Series award, said that the game presented India with a great chance to check their tenacity before the 50-over World Cup to be played in India next year.

“White ball is something very close to me. I cherish my white-ball game. We all know England are such a good team. For us, it was important to check ourselves out with our plans and the World Cup ahead. It was an ideal chance for us to step up and show what we have,” Hardik was quoted as saying in the post-match presentation ceremony.

Hardik, however, didn’t win the Player of the Match award despite picking up four wickets and scoring a 55-ball 71 with the help of 10 fours. In his first spell, Hardik picked up the important wickets of Jason Roy and Jonny Bairstow and gave away only two runs at an economy rate of 0.50.

Thereafter, Hardik returned and dismissed Jos Buttler and Liam Livingstone in pretty quick succession. The youngster said that his aim was to stop the batters from scoring runs by bowling dot balls on a consistent basis.

“It was important for me to come in and stop the runs and bowl as many dots. We took two wickets early but they recovered well and were cruising. I love short balls. I don’t fancy people taking me on, it always gets me into the game. I don’t mind getting hit for six sixes as long as I take wickets,” he added.