England captain Jos Buttler has backed Virat Kohli to regain his touch, saying that the Indian star is due for a big innings. 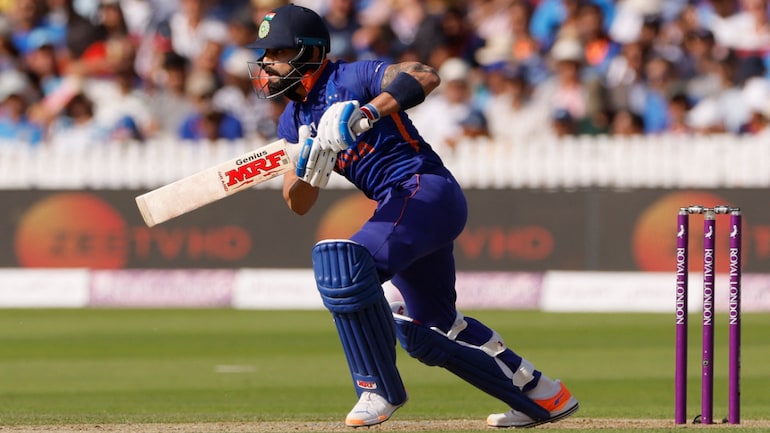 Kohli only scored 16 runs in the second ODI (Courtesy: Reuters)

England captain Jos Buttler has backed Virat Kohli to regain his form soon and said that the Indian star batter is due for a big innings.

The second ODI, that took place at the Lord’s Cricket stadium on Thursday went in favour of the hosts as they beat the Indian team by 100 runs to level the series at 1-1. Reece Topley was the star for England as he ran through the Indian batting lineup and picked up six wickets for just 24 runs.

Kohli once again failed to make an impact as he was dismissed for just 16 runs. The England tour hasn’t been a great one for the former Indian captain, but Buttler feels that he is due for a big innings.

Speaking at the post-match media interaction, the England captain said the 33-year-old is one of the best players in the world. He continued by saying that players like Kohli do go through dips in form, but a star of his class is always due for a big innings.

“I suppose in a little way it’s quite refreshing for the rest of us that he [Kohli] is human and he can have a couple of low scores as well, but look he has been one of the best players, if not the best player in ODI cricket in the world.”

“So he’s been a fantastic player for so many years and all batters, it just proves, go through runs of form where they don’t perform as well as they can do sometimes, but certainly as an opposition captain, you know a player of that class is always due, so you’re hoping that it doesn’t come against us,” said Buttler.

The England captain also admitted that he was a bit surprised by the criticism Kohli has been facing recently, saying that the Indian star’s international record speaks for itself.

“Yeah, incredibly surprised, as I said, his record speaks for himself. The matches he’s won for India and yeah, why would you question that?” said Buttler.