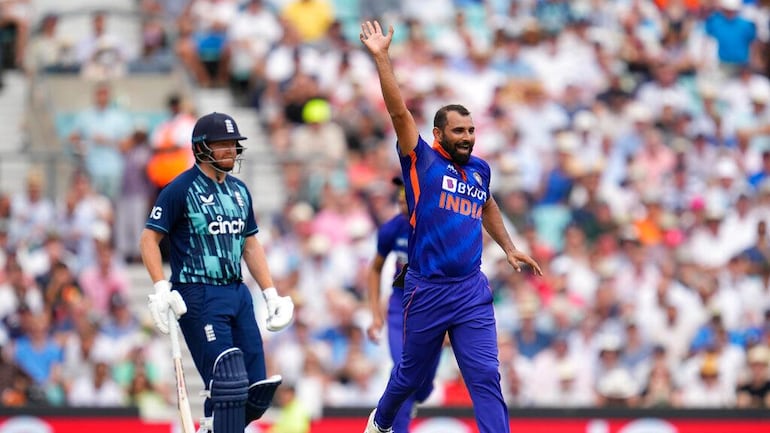 India pacer Mohammed Shami etched his name in the record books as he became the fastest Indian to take 150 wickets in ODIs during the first match against England at the Oval on Tuesday. Shami achieved the feat during the series opener against England where he took three wickets for just 31 runs as the hosts were bowled out for just 110.

A special landmark for @MdShami11 as he completes 150 ODI wickets!

Shami grabbed the prized wicket of England captain Jos Buttler, at a time when he was looking to stage a rearguard for the hosts. Shami dismissed Buttler to complete the 150th wicket in ODIs. He also dismissed Craig Overton thereafter to take his tally to 151 wickets.

Jasprit Bumrah’s career-best 6/19 put England on its knees, and Rohit Sharma’s half-century finished off India’s crushing 10-wicket win in their one-day international at the Oval on Tuesday. India shredded a formidable batting order for 110 runs in just 25.2 overs, then watched openers Sharma and Shikhar Dhawan knock off the target in 18.4 overs, leaving the advertised day-night match barely stretching into the early evening. With muggy conditions and a green track, captain Sharma chose to bowl first and did not have long to wait for the seamer Bumrah to get things moving.