India tour of England: Virat Kohli and Jonny Bairstow were involved in a heated on-field conversation as the two on-field umpires stepped in to calm things down on Day 3 morning in Birmingham. 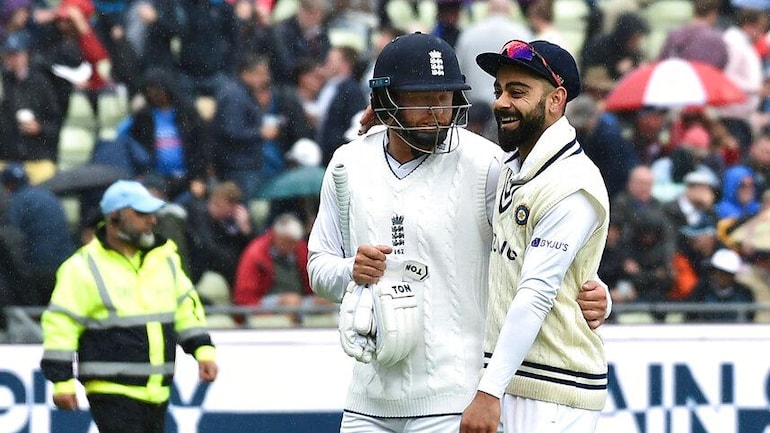 Virat Kohli was involved in a heated exchange with England batter Jonny Bairstow in the first few overs of Day 3 action at Edgbaston in Birmingham even as India pacers Jasprit Bumrah and Mohammed Shami were getting the ball to rip off the pitch on Sunday, July 3.

Virat Kohli was seen unhappy with Jonny Bairstow after the England batter said something to the former India captain. Even as Bairstow tried to calm things down with a pat on Kohli’s back, the star Indian batter was not holding back as he kept having a go at Baristow from the slip cordon.

Kohli asked the England batters to stop talking and focus as there was plenty of drama in the first 30 minutes on Day 3 of the Edgbaston Test.

The two on-field umpires, Aleen Dar and Richard Kettleborough had to step in and calm things down between the two star players.

Apparently, Virat Kohli and his teammates were unhappy with Jonny Bairstow as they felt the England batter was deliberately wasting time towards the end of Day 2. Bairstow was hit on the glove in the 24th over bowled by Mohammed Shami when a little less than 30 minutes of play was left. Bairstow called for attention as the physios came out on the field and checked on him.

Notably, Kohli had needled Bairstow on Day 2 itself and tempers flared when play resumed on a bright morning on Sunday.

Eventually, Virat Kohli and Jonny Bairstow put behind the heated exchanges between overs when the India captain was spotted giving the England batter a “friendly punch”.

It’s tense out there between Virat Kohli and Jonny Bairstow #ENGvIND pic.twitter.com/3lIZjERvDW

England were reeling at 84 for 5 after Jasprit Bumrah ran through the top-order and Mohammed Siraj got the big wicket of Joe Root on a rain-affected Day 2 in Edgbaston.

However, Jonny Bairstow put behind the early distraction and took the attack to the Indian bowlers. He went after Mohammed Shami and Mohammed Siraj to hit a 50 off just 81 balls. Bairstow partnered with captain Ben Stokes as the two England batters pressed the aggressor’s putton to put the pressure right back on the Indian bowlers.

There was more drama on Day 3 morning as Ben Stokes was dropped on 18 by Shardul Thakur as luck continued to evade Shami.