India tour of England: India star Virat Kohli was dismissed by Reece Topley as he fell after scoring only 17 runs during India’s chase in the series decider. 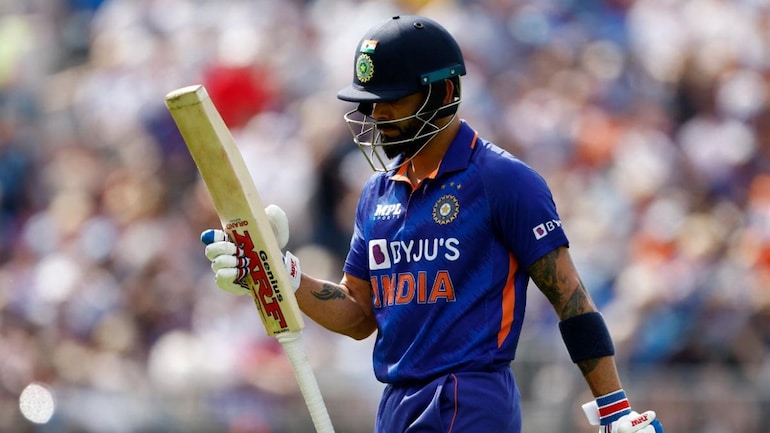 Virat Kohli’s horror run with the bat continued as the Indian star fell after making just 17 runs in the final ODI of the three-match series between India and England in Manchester. Kohli was prized out left-arm pacer Reece Topley in front of a packed house at Old Trafford. Kohli managed to muster only 32 runs in the two innings of the ODI series.

Yet again, Virat Kohli was looking so good but fell after getting off to a start. Topley bowled a beautiful delivery as it landed on off and moved away just a little. Kohli leaned forward and looked to defend but the ball took the outside edge and Jos Buttler made no mistake behind the stumps.

Hardik Pandya grabbed a career-best 4/24 as a disciplined India bowled out England for 259 with more than four overs to spare in the series-deciding third and final ODI on Sunday.

Skipper Jos Buttler top-scored for England with an 80-ball 60, but it was the flamboyant all-rounder from Gujarat, who dominated the first half of the match with his excellent bowling, sending out a warning to the opponents in the year of the T20 World Cup.

Playing in place of injured Jasprit Bumrah, Mohammed Siraj got a massive confidence boost early on, when he dismissed Jonny Bairstow with his third ball of the day. As the England opener shaped up to play it on the leg-side, the bat turned in his hand and the ball ballooned to Shreyas Iyer at mid-off following a leading edge. His tails up, Siraj then ran in to bowl to the prolific Joe Root, got the ball to move away, and the outside edge was nicely taken by skipper Rohit Sharma at second slip. Siraj, in fact, squared Root up with his late movement.