England, with eight wickets in hand, need only 113 runs to win the third Test match and complete the series whitewash against the world champions New Zealand. 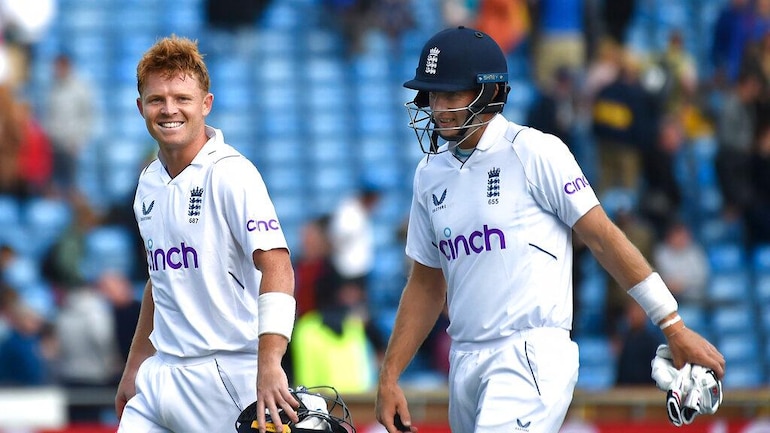 Ollie Pope and Joe Root walk off the ground after stumps on Day 4. (Courtesy: AP)

Ollie Pope and Joe Root on Sunday stood firm against world champions New Zealand on the fourth day of the third Test as England eye to complete series whitewash at Headingley, Leeds.

The duo stitched a solid 132-run partnership for the third wicket and saw off the day, with Pope inching closer to his hundred and Root standing tall after completing a half-century. England, with eight wickets in hand, need only 113 runs.

New Zealand made early inroads while defending the 296-run target before Pope and Root settled. Trent Boult and Kane Williamson combined to run out Alex Lees cheaply for nine. The English opener drove one to the left of mid off but skipper Williamson did well to stop the ball and handed it to the bowler, who completed the formalities as Lees was halfway down the track and had no chance to make it back on time. Lees’s opening partner Zak Crawley returned to the dressing room in quick succession after holing out to cover for 25.

Earlier, Jack Leach took a five-wicket haul and Matthew Potts picked up three wickets to bundle out New Zealand for 326. Daryl Mitchell and Tom Blundell, who have been exceptional throughout the three-Test match series, once again took the onus to take New Zealand to a respectable total.

Potts stopped Mitchell’s run feast and trapped him in front for 56. Blundell carried on but ran out of partners to complete his century as Leach and Potts rattled the Kiwis lineup. Blundell remained unbeaten on 88.