Former Indian pacer Ashish Nehra remained coy on Hardik Pandya bowling his full quota of overs in an ODI game. Nehra also suggested that Pandya could be in any white-ball team solely as a batter. 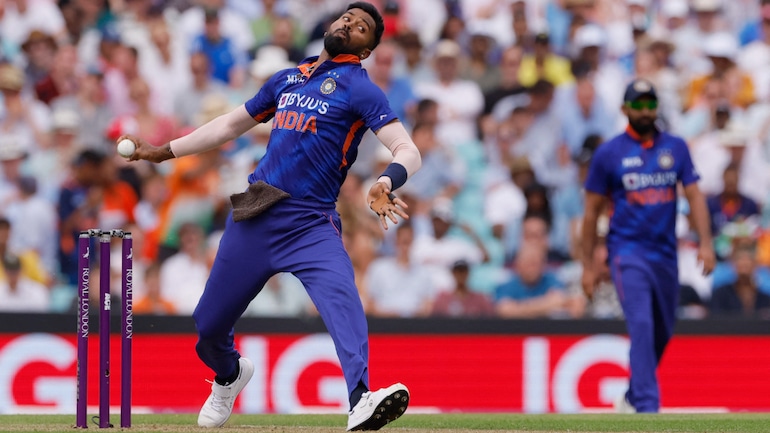 The back surgery in 2019 has had an effect on Pandya’s bowling (Courtesy: Reuters)

Former Indian pacer Ashish Nehra remained coy on Hardik Pandya bowling 10 overs in an ODI game, saying that even the all-rounder may not have an answer regarding this matter.

Pandya underwent back surgery in 2019 and it has had a big impact on his bowling. Ever since fully recovering from the procedure, the Indian all-rounder hasn’t been able to bowl regularly across different formats.

Nehra, who worked closely with the 28-year-old at Gujarat Titans during IPL 2022, said in a recent media interaction that Pandya may not have an answer if he will be able to complete his full quota of overs during an ODI match. However, the former Indian pacer suggested that things are progressing well with the Indian all-rounder.

“Even Hardik won’t be able to answer that since you can plan but things don’t always fall into place. But so far so good,” said Nehra.

Nehra also suggested that Pandya could play in any white-ball team solely as a batter. While his ability to roll over the arm is a bonus, the former cricketer suggested that the all-rounder shouldn’t be considered as a fifth bowler in ODIs and T20Is.

“Hardik can be in any white ball team solely as a batter. On top of that, if he bowls it will be a bonus. But you can’t keep him as your fifth bowler in T20 or 50 overs. He can only be your sixth bowler,” said Nehra.

Nehra added that India should be focused on building up Pandya’s fitness and the all-rounder has been doing well in the past few months.

“But looking at his fitness, you have build it up slowly. He will not be going to the West Indies for ODIs, which is good in a way. When you are an out-and-out fast bowler you don’t have a choice. You have to bowl, you have to be fit But it’s not the case with Hardik. He has been doing well during the last 2-3 months,” said Nehra.