England vs India: Jasprit Bumrah and Mohammed Shami were on fire for India as England were bowled out for 110 in the first ODI of a three-match series at The Oval on Tuesday. 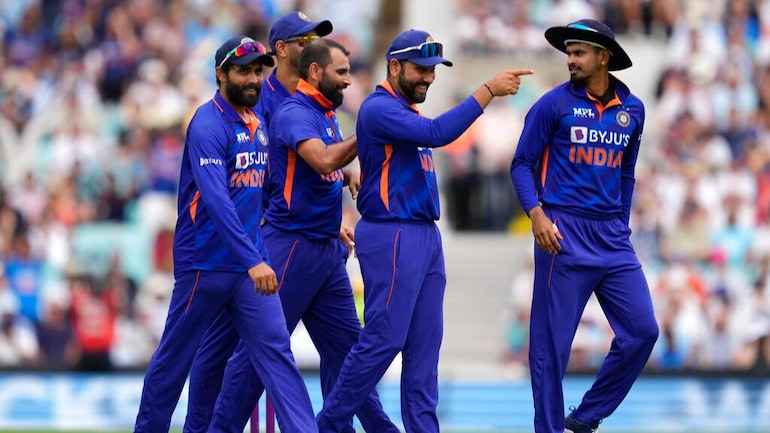 Bumrah, Shami star as England crash to their lowest total vs India in ODIs (Reuters Photo)

England collapsed to their lowest ever total in one-day internationals against India less than a month after smashing a record-breaking 498 for 4 off 50 overs in an ODI against the Netherlands.

On June 17, England had battered the Netherlands bowling attack to hit 498 for 4, which is the highest total in men’s ODIs. Jos Buttler starred with a 70-ball 162 while Dawid Malan hit 125 and Phil Salt scored 122 before a 22-ball 66 from Liam Livingstone.

However, England’s fortunes slipped dramatically after Jos Buttler took charge as the team’s shorter formats captain following Eoin Morgan’s retirement. They first lost the T20I series to India and were then bowled out for 110, which is their lowest total against India in ODIs.

This is now England’s lowest total in ODIs against India. Their previous low against two-time world champions India had come during a Champions Trophy match in October 2006 when Munaf Patel’s 3 for 18 saw them collapse to 125 all out.

England were asked to bat by India after Rohit Sharma won the toss. Their innings was derailed by Jasprit Bumrah in his first over when he picked Jason Roy and Joe Root in a double-wicket maiden. Mohammed Shami then removed Ben Stokes before Bumrah dismissed Jonny Bairstow and Liam Livingstone to put the hosts in massive trouble.

In between these two collapses, New Zealand had bowled England out for 89 in Wellington in February 2002, and years before, Australia had dismissed England for 93 at Leeds in June 1975. Australia had also rolled England over for 94 in Melbourne in February 1979 before Sri Lanka sent England packing for 99 in an ODI at Chester-le-Street on May 25, 2014.