Skip to content
Kareena Kapoor Khan is currently holidaying with her family on a beach destination. The actress recently shared a picture of herself on her Insta-story where she is seen chilling on the beach with baby Jeh.

Check out the photo here: 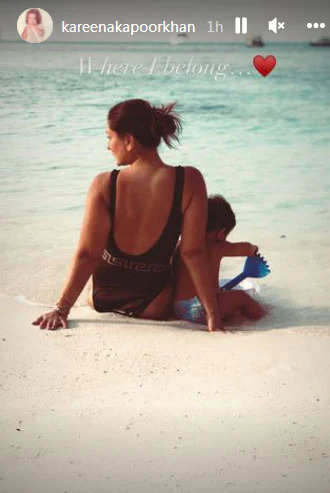 Dressed in a black monokini, Bebo is seen soaking in the sun on the beach. Her messy bun complements her overall look. Jehangir is seen beside her, playing with a toy spade on the sand. She captioned it, ‘Where I belong.’

No matter how hectic her work schedule is, Kareena makes sure she takes a break every few months and jets off on holidays with her family and friends.

She was last seen in ‘Angrezi Medium’ with Irrfan Khan and Radhika Madan. The film garnered positive reviews from the audience and the critics alike.

Next, she will be seen in ‘Laal Singh Chaddha’ co-starring Aamir Khan. The film is an official Hindi adaptation of the Hollywood film, ‘Forrest Gump’ that starred Tom Hanks in the lead role. Apart from Kareena and Aamir, the film will also feature Naga Chaitanya and Mona Singh in key roles. The film is slated to hit the theatres on August 11, 2022.

Apart from this, she has Hansal Mehta’s untitled next and Sujoy Ghosh’s upcoming murder mystery in her kitty.