Skip to content
Lovebirds Malaika Arora and Arjun Kapoor once again proved that they are truly made for each other when both shared their thoughts of life on social media today. Talking about not defining life with age, Malaika took to her Instagram story and shared a thought-provoking post that read, “No but seriously. Normalize finding love in your 40s..”

It continued, “Normalise discovering and chasing new dreams in your 30s. Normalise finding yourself and your purpose in your 50s. Life doesn’t end at 25. Let’s stop acting like it does.” Later, Arjun too shared the same post on his social media handle. 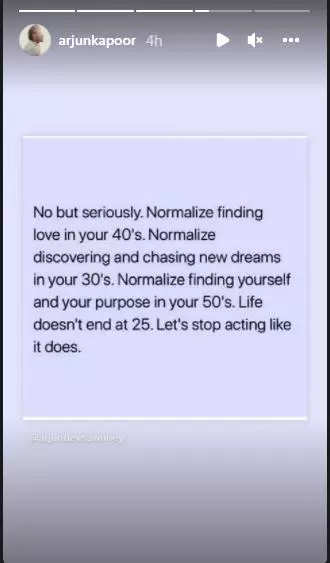 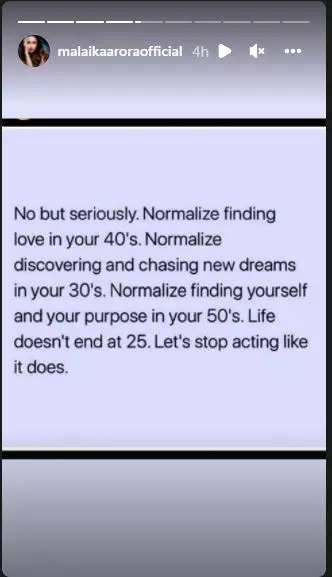 Earlier, reports were doing the rounds on social media claiming that Arjun Kapoor and Malaika Arora parted ways. Post that, Arjun took to his social media handle to dismiss the breakup rumours with an epic post.

He dropped a monochrome photo with his ladylove rubbishing the news of their breakup. In the picture, the couple looked uber-cool as they posed for a mirror selfie and it read, ”Ain’t no place for shady rumours. Stay safe. Stay blessed. Wish well for people. Love y’all ?❤️✌️”.

Only a few days ago, a source told ETimes that Malaika had stepped down to walk her dog a few days ago. However, owing to the increase in the number of COVID cases in the country, the actress has limited her outings and has been in isolation for some time now. However, this has nothing to do with Arjun Kapoor and that all is well in their paradise.

This came after Arjun, sister Anshula Kapoor along with Rhea Kapoor and Karan Boolani had tested positive for COVID-19. All four had quarantined themselves. After two weeks, they recently tested negative for the deadly virus.