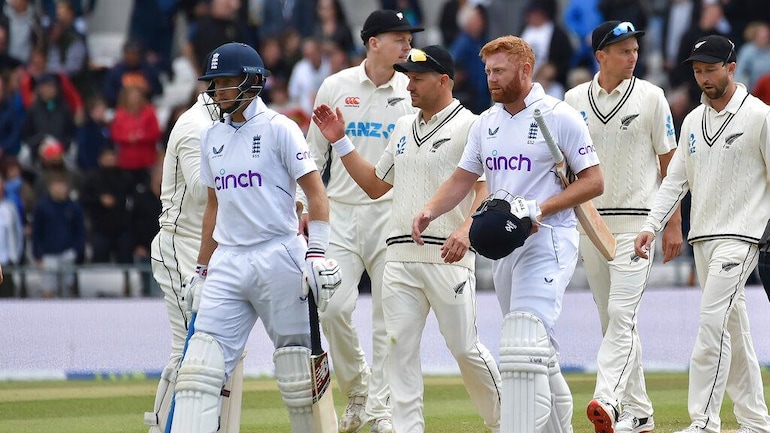 Ollie Pope and Joe Root stood tall on Day 4, with England needing 113 runs on the final day. Resuming the third Test after a rain delay, Pope was able to add only one run as Tim Southee dismissed him for 82.

Pope’s dismissal brought in an in-form Jonny Bairstow, who carried his form from the previous Test. Bairstow scored his first 25 runs off just 19 balls and added another 25 runs in just 11 balls to help England chase down the target in 15.2 overs. Bairstow and Root finished unbeaten on 71 and 86.

Jack Leach was named Player of the Match for taking two five-wicket hauls in the third Test. Leach and Matthew Potts, who picked three wickets on Dy 4, combined to bundle out New Zealand for 326 in their second innings.

Daryl Mitchell and Tom Blundell, who have been exceptional throughout the three-Test match series, once again took the onus to take New Zealand to a respectable total.

Potts stopped Mitchell’s run feast and trapped him in front for 56. Blundell carried on but ran out of partners to complete his century as Leach and Potts rattled the Kiwis lineup. Blundell remained unbeaten on 88.