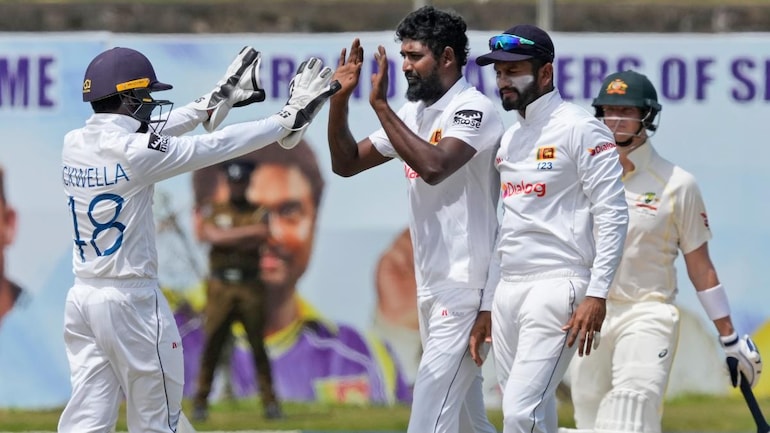 Prabath Jayasuriya grabbed the spotlight on Day Two as Sri Lanka found themselves in a strong position in reply to Australia’s 364 in the first innings on Saturday.

The debutant picked up six wickets as the visitors lost their last five wickets for just 35 runs. This was followed by an incredible partnership from captain Dimuth Karunaratne and Kusal Mendis as the hosts ended the day with 184 runs on the board with the loss of just two wickets.

Australia had started the day with a score of 298 for 5 with Alex Carey and Steve Smith at the crease. It appeared at a point that the pair would take the visitors past 400 as they extended their partnership to 77 runs. However, Jayasuriya provided the breakthrough as Carey’s attempt at a reverse sweep failed and he top-edged it to get caught.

None of the other batters could provide Smith with the much-needed backup as Sri Lanka quickly ended the innings for 364. The former Australian captain was stranded on 145. It was a day to remember for Jayasuriya as he finished with the second-best figures by a Sri Lankan on debut.

In response, the hosts got off to a terrible start as Pathum Nissanka was caught by Cameron Green off Mitchell Starc’s bowling. However, Karunaratne and Mendis came together and put on a solid batting display to frustrate the Australian bowlers. Barring a couple of moments, the pair looked assured on the pitch and put together 152 runs, which is Sri Lanka’s highest second wicket partnership against Australia.

Their half-centuries came at a decent rate as Karunaratne reached the mark in 109 balls while Mendis hit his fifty in 118 balls. The Sri Lankan captain was finally trapped in front of the wicket by Mitchell Swepson for 86 runs. His innings consisted of ten boundaries.

Mendis has been unbeaten on 84 and looks set to reach the three-figure mark on Day three. He currently has Angelo Mathews at the crease alongside him.