Wimbledon 2022: Simona Halep managed to beat the Belgian in straight sets on Court and continued her dominating run on grass over the last few months. 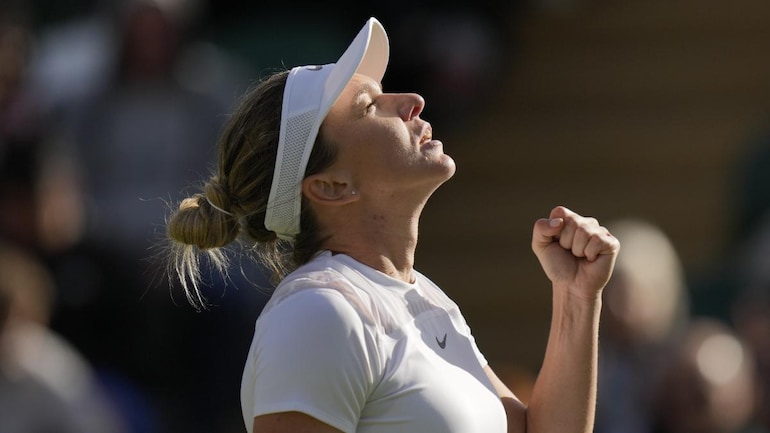 Simona Halep after winning her second round match. Courtesy: AP

Former World No.1 Simona Halep, on Thursday, June 30, qualified for the third round of the Wimbledon 2022 after beating Belgium’s Kirsten Flipkens 7-6, 6-4 on Court 2.

Halep has had her fair share of troubles of late after she suffered a panic attack during a match in the French Open 2022. Later, in a post on Instagram, the veteran said she has faced plenty and it hadn’t been easy for her by any stretch of the imagination.

However, Halep also vowed to stage a comeback, and so far, she has been clinical in the ongoing grass-court tournament at SW19. Halep made four double faults in her match against Flipkens, but made up for the same with two aces.

Halep managed to win six out of 13 break points and never allowed her opponent to settle into a rhythm. Back in 2019, Halep won Wimbledon after beating the legendary Serena Williams in the final and she has picked off from where she left three years ago.

SWIATEK QUALIFIES FOR THIRD ROUND

In another match, Polish World No.1 Iga Swiatek qualified for the third round of the Wimbledon 2022 after beating Netherlands’ Lesley Pattinama Kerkhove in a thrilling three-setter.

Swiatek won the match 6-4, 4-6, 6-3 and didn’t look at her absolute best. The 20-year-old is one of the favourites to win the championship, having already clinched the French Open earlier this month.

After the end of the match, Swiatek lauded her opponent for making proper use of the playing conditions. Having won quite a few titles this year, the woman prodigy will be looking to win one more.