Wimbledon 2022: World No. 2 Ons Jabeur fought back from a set down to beat Marie Bouzkova in 3 sets and reach her maiden Grand Slam semi-final. 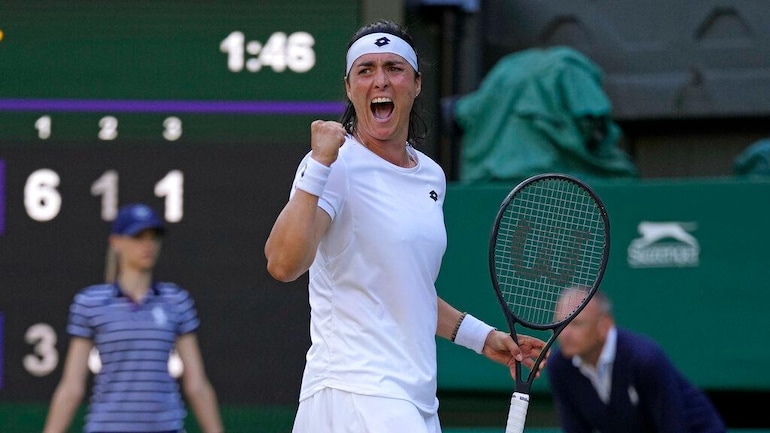 World No. 2 Ons Jabeur put on a stunning show of tennis as she fought back from a set down to beat Czech Marie Bouzkova in the women’s singles quarter-final at Wimbledon 2022 on Tuesday, July 5.

Ons Jabeur became the first Arab woman to reach a Grand Slam semi-final as she remains the highest-seeded (3rd) player in the women’s singles draw. Jabeur will face her ‘barbeque partner’ Tatjana Maria, who earlier beat fellow German Jule Niemeier in another quarter-final.

Ons Jabeur has successfully put behind the shocking first-round exit at French Open to reach her maiden Grand Slam last four round. The 27-year-old Tunisia star has stitched a 10-match winning run on grass after having headed to Wimbledon following her title win in Berlin.

Notably, Jabeur had paired with Serena Williams for doubles at Eastbourne International but she withdrew after the first two rounds due to an injury scare.

On Tuesday, playing in her second straight Wimbledon quarter-final, Jabeur in the first set failed to find a way past the stoic defence of the 66th-ranked Bouzkova, who never made it past the second round of a Grand Slam before this year’s championships.

The 23-year-old Bouzkova broke twice to take the opening set but Jabeur, bidding to become the first African woman to win a major, came roaring back to level the match with three breaks in the second.

Jabeur raced to a 4-0 lead in the 3rd set but was broken back by Bouzkova. However, the World No. 2 held her composure and got the job done to book a place in the semi-final.